The Bugler was Air Cadet James Caple. Two Standard Bearers were in attendance Ralph Cox for the Devonshire Royal British Legion and Ian Dyer for the Devonshire Royal Air Force Association. The exhortation was given by Squadron Leader Keith Lawrence a Battle of Britain Pilot who lives in Exeter.  Also in attendance was Cllr Peter Halse Chairman of the East Devon District Council, Wing Commander Brian Wills-Pope of Devon and Somerset RAF Cadets.

The ceremony concluded with the handing over of the custody of the monument to the managing director of Exeter Airport Matt Roach, 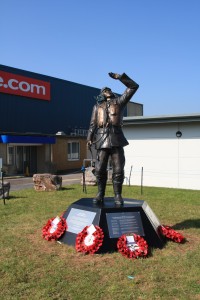 To the right the SWAHT memorial & below:

Robin Gilbert and Mike Venn from SWAHT who worked on this project relax with their respective partners, Christine & Jean, after the event that was attended by around sixty invited guests.

The SWAHT Memorial at Exeter

The sculpture depicts a fighter pilot who has returned from a major defensive mission during August 1940 over Portland, when fourteen Hurricane fighters were scrambled from Exeter to confront over one hundred and fifty enemy bombers and fighters.

During that mission Exeter lost four planes and three pilots.  The pilot who made a safe return is scanning the sky for his missing comrades.  The plinth carries five informational plaques, explaining some of  the history and acknowledges all those who served from RAF Exeter during World War Two. A sixth plaque acknowledges the major sponsors who contributed towards this project.. 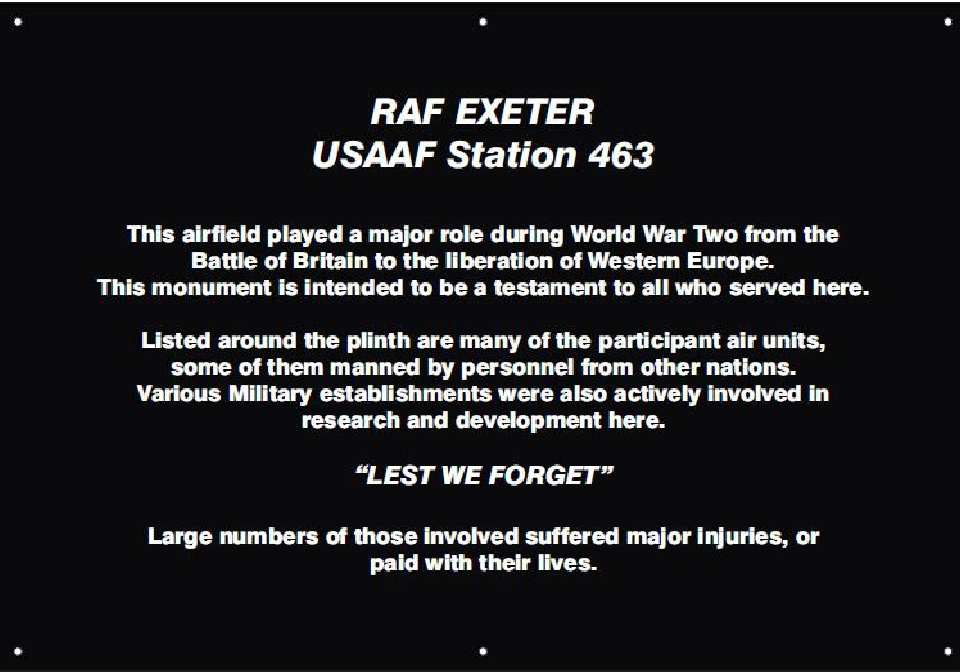 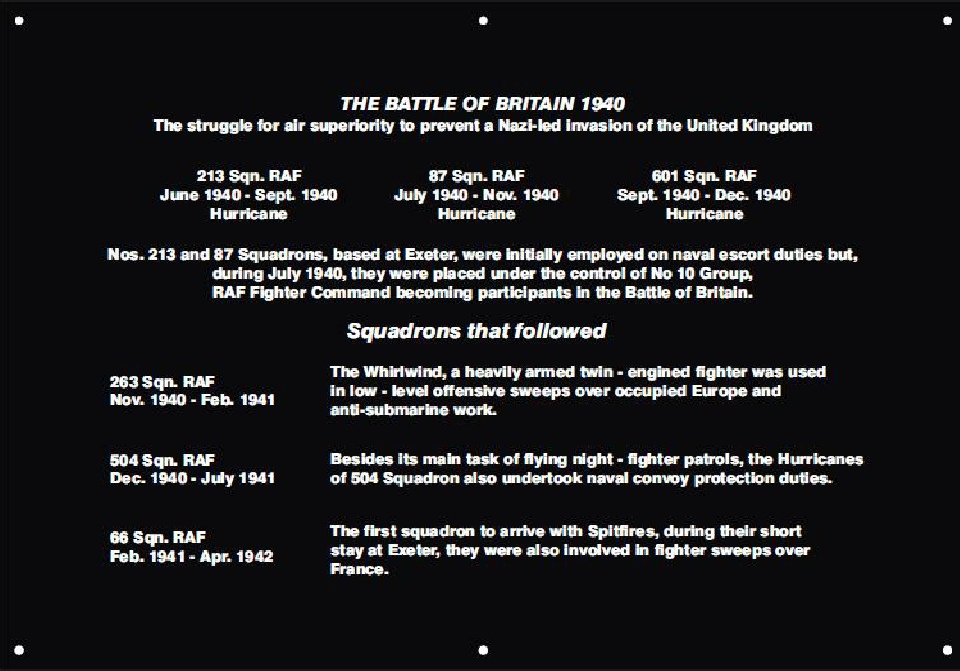 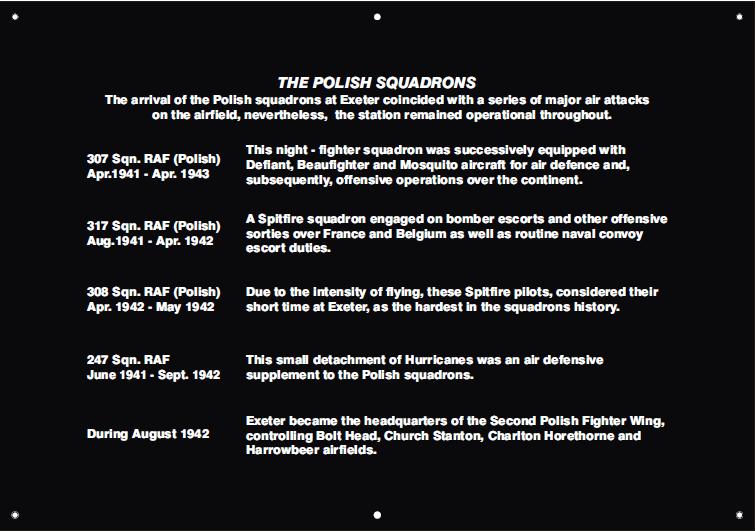 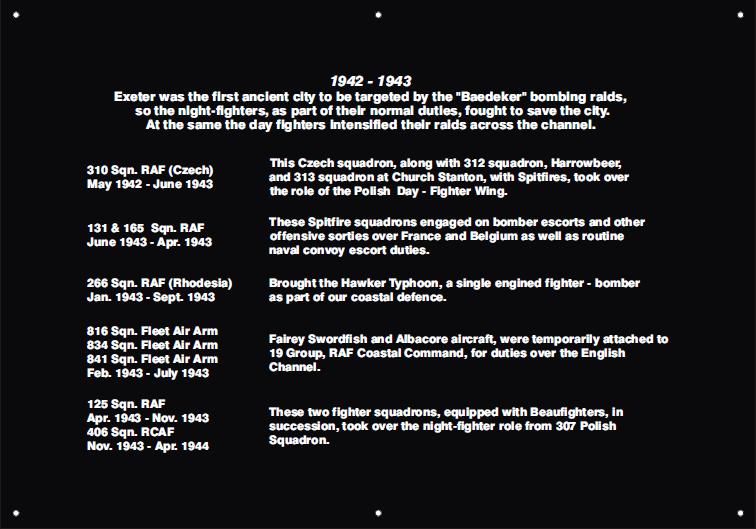 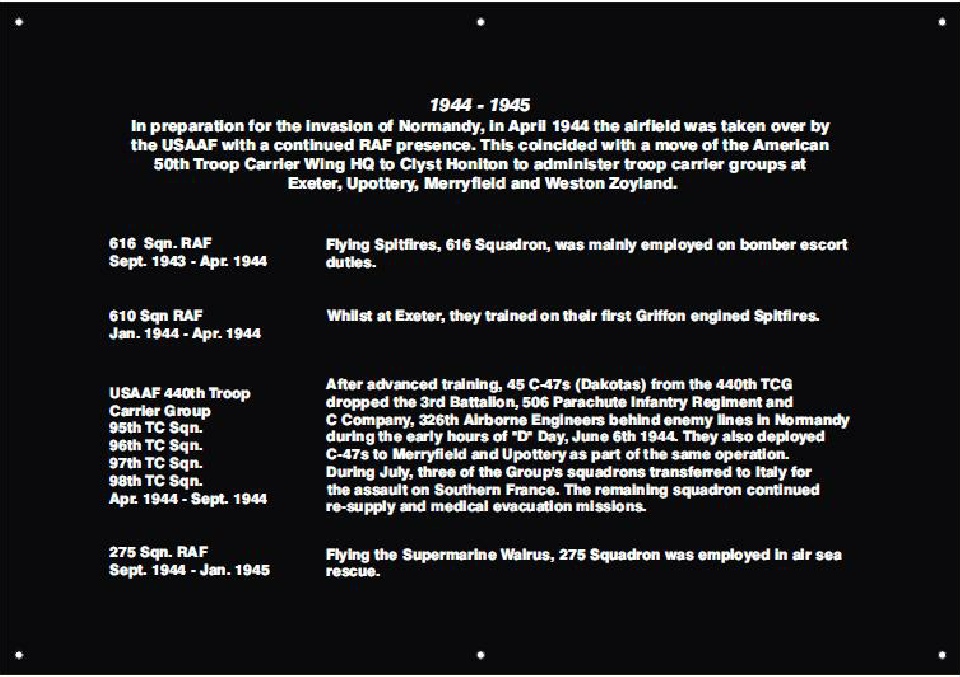 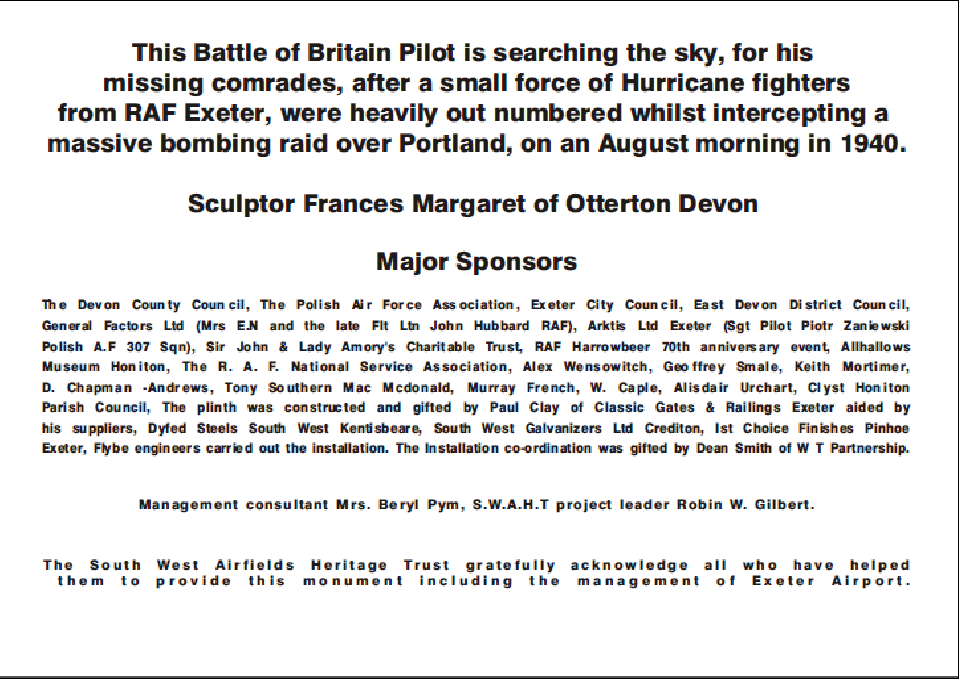 The acknowledgement plaque shown above was from a proof presentation, before minor corrections were made for the plinth, however the details remain unchanged. 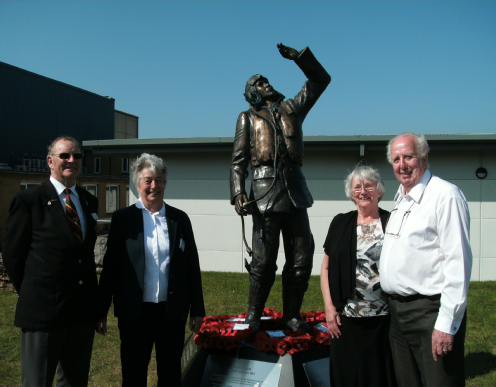 Exeter International Airport was the site of RAF Exeter during World War Two and played a major role in the defence of our island and the liberation of Nazi occupied Western Europe.

To enlighten visitors and future generations who will be passing through the airport, the South West Airfields Heritage Trust promoted this memorial, ensuring the historic integrity of this very important World War Two airfield is explained and maintained.

Additionally it will act as a well earned tribute to all those from many nations, who served at RAF Exeter during that period including, the Battle of Britain (July-Oct 1940).

Few people are aware that twenty two fighter pilots who came from many nations including Belgium, Australia, New Zealand, Canada, Poland and U.K. were killed flying from R.A.F. Exeter during the Battle of Britain, among them a Squadron Leader and a Wing Commander possibly the most senior Officer killed during that short period, from any RAF base in Britain